It has been reported that Arsenal midfielder Jack Wilshere knows their Champions League hopes are in the balance. 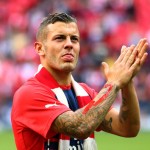 The first-leg of their qualifier finished 0-0 at Besiktas.

The England international midfielder said : “It was a hostile atmosphere, but I think we battled well and showed a different side to our game, especially at the end when we went down to 10 men, it was tough, so we did well,”.

“They worked just as hard as we did last year to get themselves into this position, so they are not going to just turn up (at the Emirates Stadium) and throw all of that hard work away.

“It is not going to be an easy game and we can’t take it for granted.

“They are going to come full of confidence from their performance in the first game and we are going to have to start how they did and take the game to them.”

“We know how big a game it is, and we will treat it as a cup final.”