Jack Wilshere has declared that Arsenal’s comeback for the 2-2 draw at Everton sets them up nicely for their Champions League clash with Besiktas. 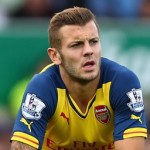 With the tie currently standing at 0-0 after the first leg, Arsenal need a win to make the group stages for the 18th consecutive time, but the England international is not worried about the prospect of failure.

“This was a fantastic point and now we have a big game on Wednesday and this will give us great confidence going into that,” Wilshere told Arsenal Player.

“We have got great character, great togetherness and some leaders out there that keep us going.

“We also have great players to go with that.

“We never give up and at this level that is massive. We have always shown over the years that Arsenal are going to battle like mad right until the end.

“There have been a few games where we have been behind right until the end but have kept going.” Arsenal In No Rush To Open Joel Campbell Contract Talks