Robert Lewandowski has confirmed that fellow countryman Wojciech Szczesny attempted to get him to sign with Arsenal last month. 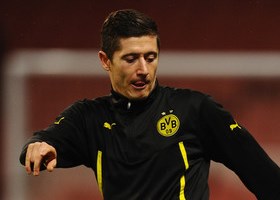 The Borussia Dortmund striker was free to speak to other clubs as his contract runs down but opted to join Bundesliga champions Bayern Munich, where he will head as a free agent in the summer.

The Poland international had emerged as a target for the Gunners late last year and the former Lech Poznan ace suggested that the north London clubs goalkeeper urged him to come to the Emirates Stadium.

The 25 year old told Polish newspaper Fakt : “I can confirm that Wojciech Szcesny tried to convince me to join Arsenal,”.

“We had several talks about this. It was him who did most of the talking, how the club looks inside, what (Arsene) Wenger thinks of me.

“When we trained before the Champions League game at Colney, there were important people from Arsenal at our sessions as well.”