Arsene Wenger is confident that Wojciech Szczesny can become an Arsenal legend.

The 23-year old Poland international goalkeeper has made the Gunners goalkeeping position his own this season after experiencing omission last term and Wenger feels he has improved since that disappointment. 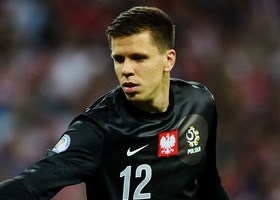 Tuesday’s 2-0 Champions League win over Marseille was Szczesny’s 50th clean sheet and Wenger can see a lot more of that type of thing occurring in north London throughout the former Brentford loanee’s career.

“Yes, he can be one of the best,” the manager told Arsenal Player.

“You have to question a little bit the defenders as well (when you consider clean sheet stats) because you’re part of a team and sometimes too many individual stats can lead you to conclusions that are not as obvious as that.

“He has already a vast experience. That’s why I think it’s very good news for the club that he has extended his contract. But rightly so as well because this club has given him a huge chance at a very young age – and that is not common at in the top, top clubs.” Arsenal, Man City On Alert As PSV Put Zakaria Bakkali Up For Sale