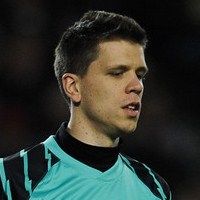 Arsenal goalkeeper, Wojciech Szczesny has declared that the Gunners can still win the Premier League this season.

Arsene Wenger’s men are painfully aware that their club has not won a trophy for six years but the young Polish goalkeeper said: “We’re still confident we can win the league.”

The 20 year old goalkeeper, who is out for a month with a finger injury, added: “I don’t care what people say.

“Manchester United have dropped points, but if we get the right results and we beat United at home, we’re going to win the league. Simple.”