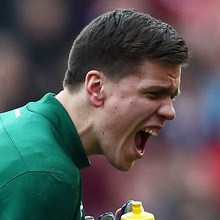 Arsenal goalkeeper Wojciech Szczesny is confident that captain Robin van Persie will stay with the club.

The Dutch striker is being linked with a move away from the Emirates Stadium as he has yet to sign a new deal with the club but Szczesny feels that the Gunners will not lose their star even though he admits they don’t talk about his current contract status.

“We really don’t discuss that, it is not our business,” Szczesny told the London Evening Standard.

“We just want to have him at the club. We are trying to make the most of it while he is here, he is a great captain and leader of the team and we are very pleased to have him.

“Robin does his talking on the pitch by scoring all the goals for this club and I think that shows you his commitment. We are confident that he will be staying at Arsenal.”