Reports are out claiming that Arsenal goalkeeper Wojciech Szczesny wants a place in the FA Cup final line-up. 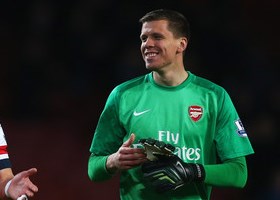 It is said that Szczesny has warned understudy Lukasz Fabianski he wants to be between the sticks for Arsenal in the FA Cup final against Hull City.

Fabianski has played every game for the Gunners on their way to Wembley and saved two penalties in the semi-final shootout victory over Wigan Athletic on Saturday.

Szczesny said: “It’s up to the manager who plays. I think Lukasz has done really well and deserves a lot of credit but I would love to play, obviously.

“I’m an Arsenal fan and I just want us to get the trophy. It’s not about me playing. Lukasz has been doing really well and he was our shootout hero at Wembley, so I was happy for him.”

Arsenal Midfielder Jack Wilshere Charged With Misconduct By The FA