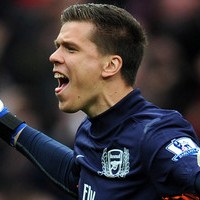 Arsenal goalkeeper Wojciech Szczesny insists he will not think about leaving the club until he helps them secure some silverware.

The 21-year old Pole has been one of the success stories of Arsenal’s season, emerging as one of the Premier League’s top keepers, and he has assured the North Londoners that he will not depart until a trophy lands in the Emirates Stadium cabinet.

“I can’t imagine myself in the next few years’ time playing anywhere other than here,” he said.

“In fact, I won’t move until we win something.

“Recently, one of the journalists asked me whether I have bigger ambitions than playing for the third place in the Premier League with Arsenal. God, sure I have! I look at the table and realise that is our maximum this year.

“It is seven years since Arsenal won something and it won’t change this season. But the next one? Who knows?

“I stand in front of a mirror and say to myself: ‘Damn, I’m interested in winning trophies only with Arsenal.’

“I want to be part of the team that show fans the bad times are over. I won’t leave until we achieve this.”