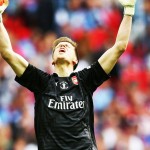 Reports are out claiming that Wojciech Szczesny has played down talk of a potential summer departure from Arsenal.

The Polish goalkeeper has been continuously linked with an exit from the Emirates Stadium but after winning the FA Cup with the Gunners, has no plans to leave north London anytime soon.

“You like to speculate but I’m happy where I am,” Szczesny said.

“I’ve got all the support in the world off the manager (Arsene Wenger), I’ve a fabulous relationship with him, so you can stop the guessing now – I’m here for good.”

Szczesny was deposed as Arsenal’s first-choice Premier League keeper early in 2015 with Wenger preferring David Ospina but held his spot throughout the entire FA Cup run. Arsenal Legend Delighted With The Emergence Of Dele Alli