Reports are out claiming that AS Roma goalkeeper Wojciech Szczesny still has hopes of returning to Arsenal. 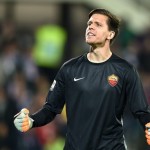 However, the Poland international goalkeeper hints his relationship with Gunners manager Arsene Wenger is frosty.

He told Alfredopedulla.com: “I am on a straight loan, in 9 months anything can happen, so I do not know what will happen after this season.

“But Arsenal is a bit like my family, if you had told me a year ago that I’d be playing in Rome I would never have believed it, but that’s football.

“I have to admit that if the Gunners called me back, I would say yes.

“My relationship with Wenger? Let’s say there is no love, but not hate. I owe him so much, he was always clear to me and explained to me why I was not playing. It was not easy, but I had to accept it.”