It has been reported that Arsenal boss Arsene Wenger says Wojciech Szczesny remains his No1. 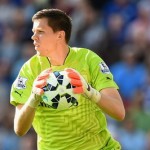 Wenger, though, is delighted with the form of goalkeeper David Ospina.

“David Ospina has had some time to settle because he was injured when he arrived here,” said Wenger.

“During that time we could see his dedication, his focus and his quality. He’s in a fight with Wojciech Szczesny to start at the moment. Wojciech is the No1 but David has played recently. Can he retain the shirt in the coming games? We’ll decide that. I don’t forget Emiliano Martinez either, who I rate highly. We have three top goalkeepers and the fight for who starts is going on.

“You have to be consistent if you want to retain the shirt. It can be very difficult to adapt for a goalkeeper when you move to England. In fact, it is maybe the most special and difficult position to get used to. Why? Because there is more freedom here to challenge the ‘keeper than in any other country, which I like.

“It is a big test for a goalkeeper because you need to be committed, brave and not fazed by the challenges you get. The first signs that David has shown are positive but it is not done. Every game is no important for him.”