It has been revealed that Arsenal goalkeeper Wojciech Szczesny has penned new terms. 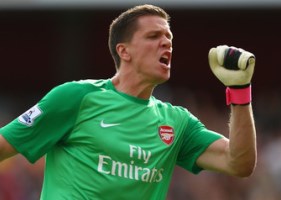 The Mirror revealed that the Poland international goalkeeper has signed a new four-year deal at the Emirates which could make him one of the highest-paid shotstoppers in the world.

The 23 year old will reportedly trouser in excess of a staggering £20million over the duration of the deal after Gunners bosses agreed to DOUBLE his weekly wages.

Szczesny – who has been in fine form for the club this season – earned £40,000-a-week on his previous deal but could now pocket £100,000 putting him on par with some of the club’s top earners. Arsenal Boss Arsene Wenger In The Dark Over How FFP Works