It has been reported that Wojciech Szczesny has hit out at Arsenal’s “lack of discipline” after their shock defeat at Swansea City. 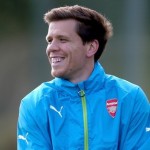 The Poland international goalkeeper insists the Gunners must iron out the defensive howlers that have cost them dear in the Premier League and Europe.

“For the majority of the game [against Swansea] we looked solid at the back and we looked dangerous,” he said.

“We had a poor five-minute spell and at this level it costs you.

“It’s something that we need to focus on because it’s been two games where short spells lacking discipline and focus have cost us.

“You can’t just hope that the next one will be different and we’ll get a bit of luck.

“We need to focus for 90 minutes and do our jobs properly offensively and defensively. Then things will change.” REVEALED: Arsenal Had Deal For Man Utd’s Di Maria As A 17 Year-Old