It has been revealed that Arsenal goalkeeper Wojciech Szczesny will discover if he will be slapped with an extra ban after his reaction to being sent off in defeat to Champions League opponents Bayern Munich. 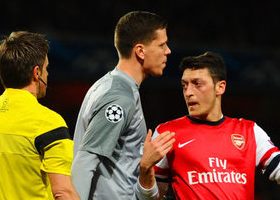 It is said that UEFA will review the referee’s report before deciding whether to take action against the Arsenal goalkeeper, who made the gesture as he left the pitch after his 38th-minute red card.

The Poland international was sent off for bringing down Arjen Robben as Arsenal lost 2-0 in the first leg of their Champions League last-16 tie at Emirates Stadium.

Arsene Wenger did not see the incident but a television audience of millions saw Szczesny’s gesture and UEFA could open disciplinary proceedings after reviewing the footage.