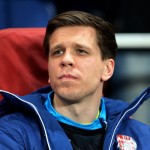 The London Evening Standard reported that Szczesny has grown increasingly frustrated at his lack of playing time after being dropped and fined £20,000 for smoking in the showers after the Gunners’ 2-0 defeat at Southampton on New Year’s Day.

Wenger will not guarantee Szczesny first team football next year but will not force him out of the club.

But should Szczesny not wish to fight for his place and both parties decide the best option is for him to move on, Arsenal are expected to seriously explore the possibility of signing Chelsea goalkeeper Petr Cech.