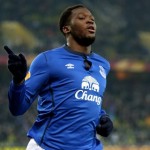 Reports are out claiming that VfL Wolfsburg are ready to spend big to land former Chelsea striker Romelu Lukaku.

The Mirror reported that Lukaku is back on Wolfsburg’s transfer wish-list – and they are ready to offer £33million for the Everton striker.

German side Wolfsburg are preparing to step up their interest in Lukaku, 21, as they close in on clinching a Champions League place.

They were keen on signing him last summer but baulked at Chelsea’s asking price, having already done other expensive deals before turning their attention to the Belgium international.

Sources close to Wolfsburg estimate it will take at least £33m for them to stand any chance of prising Lukaku out of Goodison Park.