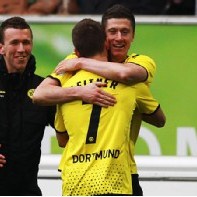 Leaders Borussia Dortmund defended their three-point advantage over Bayern Munich ahead of Wednesday night’s big match with the Bavarians in Westphalia thanks to an impressive win at Wolfsburg.

Two goals from Robert Lewandowski and an Ilkay Gundogan strike were enough to keep Jurgen Klopp’s men on course for a successful defence of their Bundesliga title.

Mario Mandzukic made them sweat with a goal which made it 2-1 after an hour, but the home side were unable to equalise and lost Alexander Madlung to a red card in the 84th minute before Lewandowski’s second goal sealed Dortmund’s win.