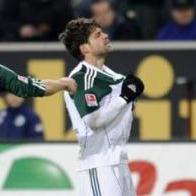 VfL Wolfsburg’s Diego scored twice after missing a penalty to earn a 2-1 win over Bundesliga bottom side Borussia Moenchengladbach on Friday and end his team’s four-game losing streak as they fight to stay up.

The Brazilian, who got a one-game ban earlier this month for defying team orders and taking a penalty which he missed, again fired his spot kick over the bar in the 29th minute.

But he quickly made amends, finishing off a swift move from close range seven minutes later and then curling in a spectacular 25-metre freekick just before the break.

The visitors were given more space in the second half as Wolfsburg pulled back and they cut the deficit in the 74th when Filip Daems converted a penalty.

Gladbach then missed several good chances to level as Wolfsburg hung on for their only second win in their last 14 games and the first under coach Pierre Littbarski, who replaced former England manager Steve McClaren earlier this month.

Wolfsburg moved up to 26 points, three above the relegation playoff spot, with Gladbach anchored in last place on 19.