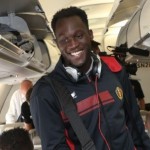 The Belgium international striker is unsettled at Chelsea after spending the past two seasons away on-loan.

“If the player is cheaper, this could maybe gain some momentum,” said Hecking of Lukaku’s price.

“But even then we are not alone.”