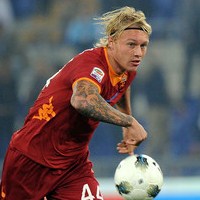 Simon Kjaer has admitted that he hopes to stay with AS Roma.

The Denmark international is currently on-loan at the Italian club from Wolfsburg.

“He’s delighted that he has returned to Italy after his spell at Palermo.

“He loves this city, the Italian championship and the people. He’s very happy and he isn’t missing Germany.”

The 22 year old joined the Giallorossi initially on loan for €3m, but with an option to buy outright for a further €7m.

“The hope is that he remains,” Beck continued.

“We’re remaining positive because Kjaer wants to stay and he wants to become an important player for this club.”