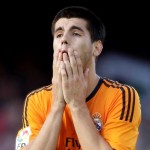 Reports are out claiming that Wolfsburg are not giving up on Real Madrid striker Alvaro Morata.

WAZ revealed that Real are well aware that Morata is keen to try his luck elsewhere, but are reluctant to completely cut their ties with the starlet.

Wolfsburg chief Klaus Allofs has confirmed the club’s interest and claimed that he will be getting back in touch with Real shortly.

The talented Spanish striker has also been linked with a move with Juventus and Arsenal in recent weeks.