Reports are out claiming that a return to Germany could be on for Manchester United midfielder Shinji Kagawa. 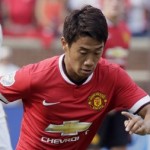 The Japanese international has been linked with former club Borussia Dortmund after manager Louis van Gaal confessed his squad boasted “too many No10s”.

However, the Mail on Sunday reported that Wolfsburg, who were beaten by Everton in their bid to sign Romelu Lukaku, have now turned their attentions to United’s Japanese playmaker.

Wolfsburg would have the spending power to cover Kagawa’s wage demands to take him back to the Bundesliga this month.