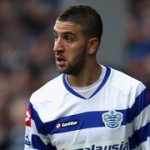 The Sun says the Bundesliga outfit have put him on their list of targets as they look to re-shape their squad.

Taarabt, 22, played a huge role in getting Rangers promoted and is now pitching in after a mixed start to the season at Loftus Road.

He had been hoping for an improved deal at QPR but so far has not agreed terms.

Arsene Wenger : Arsenal Did Not Try To Sign Joey Barton!