It has been reported that Wolfsburg are entering talks with released Arsenal striker Nicklas Bendtner. 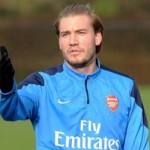 The Denmark international has failed to find a new club since being cut loose by the Gunners at the end of last season.

BILD reported that Wolfsburg chief Klaus Allofs, in the market for a new centre-forward, has setup talks with Bendtner and his agent to discuss a move to Germany.

Allofs won’t pay over the odds to sign the Dane, but hopes to charm him into accepting a deal that brings him in line with the club’s pay structure.

In England, Bendtner has been linked with West Ham United and Hull City in recent days. Francis Coquelin Back In Training At Arsenal