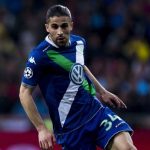 Reports are out claiming that Wolfsburg fullback Ricardo Rodriguez is determined to leave this summer.

Blick reported that Rodriguez is desperate to leave Wolfsburg.

The Swiss international left-back has endured a difficult season at the Bundesliga club but that has reportedly failed to put Arsenal off being interested. Real Madrid are also keen.

He recently admitted that it was “unrealistic” that he stayed at Wolfsburg and now Wolfsburg’s sporting director Klaus Allofs has confirmed he is expected to leave.

“As we have recently gathered, it was clear. His idea is to leave us,” he said.