Reports have emerged claiming that Arsenal and Chelsea are competing with Wolfsburg for Bayern Munich midfielder Luiz Gustavo. 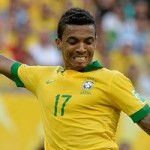 The 26 year old Brazil international is a confirmed target for Wolfsburg, with a push from the Bundesliga outfit launched last week.

It is said that the German champions want €18 million for Gustavo and Kicker claims that Arsenal and Chelsea are also moving for the midfielder.

Wolfsburg’s approach has flushed out interest from both Premier League giants and Gustavo would prefer a move to London over Bayern’s German rivals. Arsenal To Open Talks With Bayern Munich For Javi Martinez