Wolfsburg striker Ivica Olic has revealed that a potential shift to the Premier League is certainly appealing. 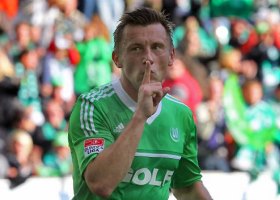 The 34-year old Croatia international striker is unsure of his future in Germany with his contract coming to an end, although he does have a clause in his deal allowing him to remain at the Volkswagen Arena if he sees fit.

Olic has been linked with Stoke City in the past and admits he would love to play in England’s top flight before his career is over.

The former Bayern Munich star told WAZ : “I can prolong in Wolfsburg for one more year, and would also have an option for another year,”.

“What the club has offered me is okay, I am satisfied with that, but I don’t know if I will stay.

“As a young player my dream was to play in the Premier League. The option never really came up after that.

“Now, at this age, I may have that chance. To play against Arsenal, Chelsea or Liverpool one more time, that excites me.”