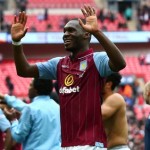 It has been revealed that VfL Wolfsburg are eyeing Aston Villa striker Christian Benteke.

Wolfsburg chief Klaus Allofs is in the market for a new centre-forward signing and is turning to Benteke after being frustrated in their pursuit of Everton striker Romelu Lukaku.

BILD claims that Allofs is now in contact with Villa and has asked them to name their price for Benteke.

Villa, whose Premier League status has now been secured, are reluctant to sell and quoted Allofs €42 million in order to do business.

Wolfsburg are not alone in their pursuit, with AS Roma and Manchester United also eyeing Benteke.