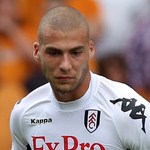 Two goals late in the first half were enough to see Wolves beat Fulham 2-0 in the season’s first Premier League fixture at Molineux.

Kevin Doyle scored from a tight angle before Matt Jarvis doubled the hosts’ lead in first half stoppage time as Wolves cruised to a comfortable win over the West London-based outfit.

Fulham struggled to match the fast-paced football Wolves produced and had to wait until the 79th minute to properly test Wayne Hennessey in the home side’s net, although Damien Duff should have done better with a shot from close range and Clint Dempsey ought to have scored late on when faced with an open net.

The hosts, who were looking for back-to-back victories in their opening two fixtures of the Premier League season for 13 years, controlled possession throughout the opening 45 minutes but struggled in the final third.