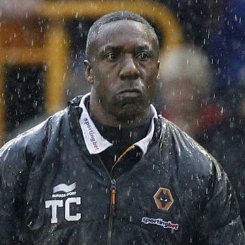 Manchester City condemned Wolves to relegation and ensured Roberto Mancini’s side are on course for their first league title since 1968 with a 2-0 victory at Molineux.

Manchester United’s failure to hold onto a two-goal lead against Everton earlier in the day saw City’s fate placed back in their own hands and the pretenders to the throne moved three points behind their great rivals ahead of the Manchester derby at the Etihad Stadium on April 30, when they can go top of the table on goal difference if they win.

Sergio Aguero opened the scoring at a roan-soaked Molineux with a neat finish against a Wolves side that suffered a ninth successive home defeat to confirm their relegation back to the Championship after a three-year stay in the top flight.

Samir Nasri doubled City’s lead with 16 minutes remaining to compound the misery of Terry Connor, who has now collected just two points in nine games since the decision to replace Mick McCarthy as Wolves manager in February.

Who Would You Like To See Play In The Premier League? – Vote Now!

Yaya Toure Looking Forward To The Return Of Vincent Kompany