Goalkeeper Keylor Navas was the hero for 10-man Costa Rica as the nation reached the quarterfinals of the World Cup for the first time in their history after beating Greece 5-3 on penalties in Recife. 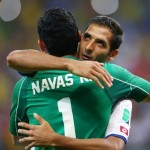 Bryan Ruiz’s second-half goal was cancelled out in injury time by Sokratis Papastathopoulos to send the game to extra time and then penalties, before Theofanis Gekas saw his spot kick saved and Michael Umana put away the winning penalty for Costa Rica.

Los Ticos have been the tournament’s surprise package in Brazil, overcoming Uruguay and Italy before holding England to a goalless draw as they won Group D.

That dream run continued in Recife on Sunday as they rode their luck against Greece to win a tense clash at the Arena Pernambuco to set-up a quarter-final clash against the Netherlands.