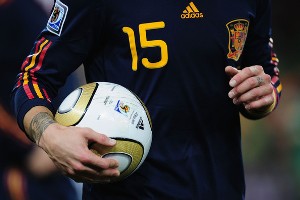 The Jabulani football used in the FIFA World Cup final 2010 in South Africa was sold for £48,200 in an online auction.

The ball made by Adidas was one of those used in the final between Spain and Holland played in Johannesburg.

A spokesman from ebay said that a total of 133 bids were placed from 55 international bidders.

Though it was not known who bought the ball, Adidas later said a group of Spanish fans made the highest bid.