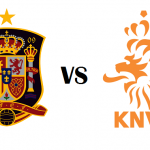 The Dutch side will include include a rejuvenated Wesley Sneijder, who has bounced back from losing the captaincy and his place in the side to take a key role as provider for Arjen Robben and Robin Van Persie. Sneijder will play just in front of midfield enforcer Nigel de Jong – fortunate to stay on the pitch in the 2010 final after a kung-fu kick on Alonso – and Jonathan de Guzman (if fit) or Jordy Clasie. Jor Ron Vlaar will lead a back line including the promising Daley Blind, son of Danny who becomes Dutch coach in 2016.