It has been reported that Spain and Real Madrid star Xabi Alonso has denied reports he has decided to quit international football. 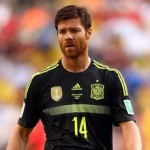 The 32 year old told Spanish radio station Onda Cero: “I’m still not at that moment, I want all this to end as soon as possible, go on holiday, disconnect a little and then decide things with time. Right now is not the time.”

Alonso would not be drawn on reports that his team-mates were upset by his critical post-match comments in the wake of their 2-0 defeat to Chile.

He said the atmosphere among the squad in Brazil was similar to during their victorious Euro 2012 campaign.

“I’m not going to say what’s happening in the dressing room, for me that should stay there,” he said.

“The atmosphere and feeling in the dressing room is the same as it was two years ago. It’s all very natural, there isn’t the tension that you (the media) imagine there is.” Agent Insists Alvaro Morata Under No Pressure From Real Madrid