Xabi Alonso believes Manchester City has one of the highest quality array of players in Europe. 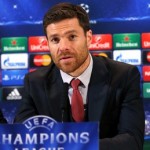 The Bayern Munich midfielder and his teammates take on City at the Etihad Stadium in Group E of the Champions League on Tuesday night in what is a must-win for the English premiers.

Although former Barcelona star Xabi admits City have been below their best in recent times, he is well aware that Manuel Pellegrini has at his disposal a very dangerous group who are capable of beating anyone on their day.

“Obviously City are in a difficult position but they have won the Premier League a couple of times. I am pretty sure this season they want to show their level and they want to go through,” he said.

“They have important players suspended but as a whole it is one of the best squads in Europe.

“It is hard to tell from the outside but you expect any season that City will make that impact in Europe. So far they haven’t done it but I am pretty sure it is not far, that big year in Europe. Season by season they try to improve.

“It looks like a very serious project and competing with the other clubs in Europe is for sure one of their goals. Even though it looks a difficult situation for them, it could change in 90 minutes. We will have to do our job.”

City find themselves sitting at the foot of their group with just two points from four outings meaning they must not lose to the undefeated Bayern if they want to keep their Round of 16 qualification hopes alive.