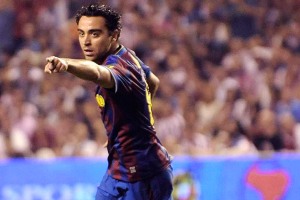 Barcelona bounced back from their shock Champions League defeat at home to Rubin Kazan to thrash Zaragoza and extend their lead at the top of the Liga table.

Xavi told reporters that the Barcelona players have shown that they are physically strong and are capable of scoring goals.

He added that the win is a very good result for Barcelona and that they are the leaders with another three points. He also said that people tend to be result-focused but everyone at Barcelona knows that things are going well.

He went on to say that on Tuesday against Rubin Kazan, Barcelona played well but failed to test their goal and against Zaragoza the team played more quietly and were 2-0 ahead in no time.