It has been reported that Xavi insists criticism of Barcelona’s campaign thus far is over the top. 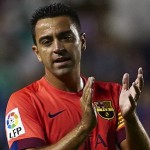 The 34 year old admits that the team was far from its best for victory at Almeria.

“We would like to be at our best in every game and for that to happen as soon as possible … But we started the season with a new manager and new players. All the same, we are going about things the right way.

“There will always be criticism. It may not have been an excellent Barça that we saw on Saturday, but we are humble enough to be self-critical. B+ is not a good enough grade at Barça. We need nothing less than straight A’s.”