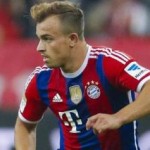 Liverpool and Manchester United are both understood to have been considering launching bids to sign the Switzerland winger in the new year, as both Brendan Rodgers and Louis van Gaal attempt to bolster their squads, says the Daily Star.

But Shaqiri’s agent and brother, Erdin, has now urged the Premier League giants to delay their bids until the summer.

“Xherdan is 23. At this age, he needs to play regularly, which is not currently the case,” Erdin told GLANCE.

“We are now waiting safely until summer. Then, when teams come as Liverpool, Manchester United, Inter Milan and other top clubs we hear that to us safely.”