Reports are out claiming that Yaya Sanogo has revealed that teammate Francis Coquelin encouraged him to join Championship side Charlton Athletic. 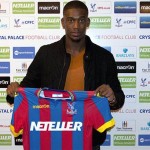 Following a difficult spell at Ajax, Arsenal striker Sanogo will now look to revive his career after making a loan move to Charlton on deadline day.

Sanogo is pleased with his move to The Valley and has revealed that former Addicks loanee Coquelin recommended the London club to him.

“I spoke to my friend Francis Coquelin and he told me a few things about the club,” he told Charlton’s official website.

“He said that this was a good club and that is would be a good choice for me to come here.

“My first day here was very good. I met all of my teammates the manager and I am happy to sign with Charlton.

“I want to help us to stay in the league and I will work very hard to try and do that.”