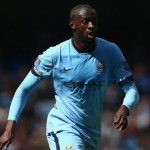 It has been reported that the agent of Yaya Toure expects the Ivorian to leave Manchester City this summer.

In an interview with Sky Sports, his agent Dmitri Seluk claimed that Toure was intent on leaving, and added that three clubs are interested in his signature.

He said: “It’s 90% certain he’ll leave Manchester City this summer. Nothing has been decided – we are waiting until the end of the season.”

Seluk also Toure will sit down with City next week to decide his future.

Reports from Italy suggest that Toure is one of five City players who have been discussed as possible bait in a bid to sign Paul Pogba from Juventus in a player-plus-cash deal. Mario Balotelli : I Have No Real Friends Here!