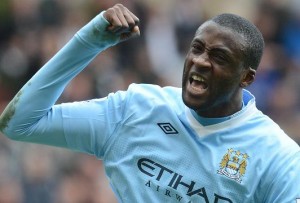 Yaya Toure has signed a new deal at Manchester City worth nearly £45m over four years.
The Ivorian midfielder, 29, has agreed a new contract worth around £11m a year, just a couple of weeks after he was reportedly on the verge of quitting the club.
His wages of just over £210,000-a-week will remain unchanged.

His influence in City’s midfield remains as strong as ever and Toure was a little confused that a new contract had not been sorted in the first half of the season.
City’s hope of retaining the Barclays Premier League look slim as rivals United currently enjoy a 15-point lead at the top, but they could reduce that deficit in Monday’s derby at Old Trafford.
After three years at Barcelona, Toure joined big-spending City for a fee of around £24m on July 2, 2010 and was allocated shirt number 42 – the reverse of the 24 jersey he worse at Barca.