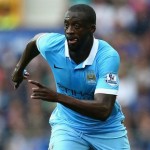 Mancini made no secret that he wanted to sign the Ivory Coast international over preseason.

“He’s a player of a superior level. With him we would’ve made an enormous step forward in every aspect. He wanted to come here, then changed his mind…

“Paulo Dybala was also an objective, one of the first targets. There were two or three clubs after him and in the end Juventus got there.”