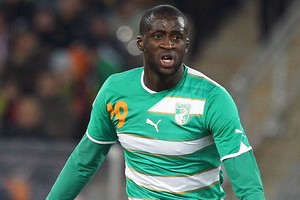 Yaya Toure has flown to the US to join his new Manchester City teammates.

The Ivory Coast international will become the first of Manchester City’s summer signings to make his debut when he features in Friday’s friendly against Sporting Lisbon.

Toure, a £24million capture from Barcelona, is flying out for the east coast leg of City’s US tour this week and will meet his new team-mates for the first time.

He will be joined by big brother and skipper Kolo and England pair Gareth Barry and Shaun Wright-Phillips.

Roberto Mancini is keen to see Toure in action and has pencilled him in to figure at some stage in Friday’s game in New York.