It has been revealed that Yaya Toure was delighted after Manchester City defeated reigning champions Manchester United 4-1 on Sunday. 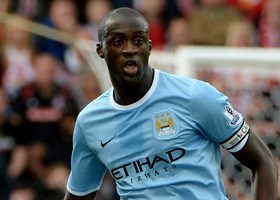 City dominated at the Etihad Stadium with first-half goals from Sergio Aguero and Toure before Aguero added a second early in the second half and Samir Nasri made it 4-0 in the 50th minute.

Wayne Rooney pulled one back for United late but the damage had been done with Toure full of praise for the way his teammates went about it.

“In the first half, we scored two fantastic goals which gave us a massive advantage for the second half. I got lucky – I was in the right position.” Martin Demichelis Ready To Fight For His Place At Manchester City