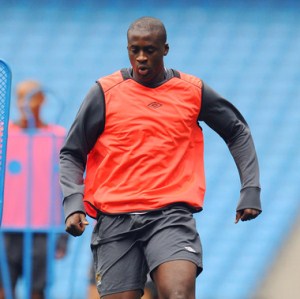 Toure, who has joined his brother Kolo at the club after wearing the colours of Barcelona, is optimistic about the future.

Manchester City go into tonight’s match against Liverpool on the back of a 1-0 victory against Timisoara on Thursday in the Europa League play-off first leg match in Romania.

Toure said: “The championship is the most important thing for us. We want to do well as the club has signed some top quality players.

“People like myself, Silva and Balotelli have come in. I just hope we do not get injuries as we want to keep at a high level.

“It was nice to get a win in Romania. When you play away it is not so easy. Now we need to be clever in the second game.”