It has been revealed that Yaya Toure is angry being snubbed over a new contract at Manchester City. 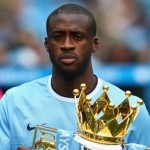 The Daily Star claims that the Ivory Coast international’s unhappiness with Manchester City stems from being left out of a raft of contract extensions handed out by the Premier League champions.

The former Barcelona mid?elder’s camp feel he should be treated in a similar way to fellow key players Sergio Aguero and David Silva. Both are being offered new deals.

Toure’s current £200,000-a-week deal runs until 2017 but he feels he should be rewarded with a new contract offer.