Yohan Cabaye : Only Anzhi Wanted To Sign Me, Not Arsenal! 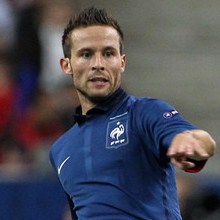 The Frenchman has started all nine league games this season but it could have all been so different if he had listened to his former Lille bosses and followed the money.

He said: “If it was all about money I would now be in Russia and not in Newcastle. Many people did not understand my decision but it was easy for me. The people of Lille wanted me to go to Anzhi but I personally was not interested.

“The Premier League is the best in the world and I’m happy with my choice. My priority is not money but at Newcastle I have a good salary and I cannot complain.”

Cabaye’s move to the north east of England came amid speculation he was a target for fellow Frenchman Arsene Wenger at Arsenal but he claims there was only one English club in the running.

He added: “It was only a rumour that Arsenal were interested. The only team in the Premier League that was interested in me was Newcastle.

“I called the coach, Alan Pardew, and he convinced me. The Premier League is incredible. The fans travel everywhere and with support like that you get less tired on the field.”


Ferguson : We Know What Louis Saha Is Capable Of