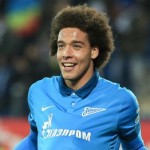 Reports are out claiming that Axel Witsel has admitted that he would love to play in the Barclays Premier League.

The 26-year old Zenit Saint Petersburg midfielder has often been linked with England’s top flight but opted to head to Russia from Portuguese giants Benfica in September 2012.

However, the Belgium international now confesses he wants to experience the ‘crazy’ Premier League and has identified Manchester United as the club he would most like to represent.

“I have always liked Manchester United from when I was young,” he told Bleacher Report.

“I want to play in one of the top clubs in Europe one day. It’s true that I like the Premier League, because it is one of the best leagues in the world, for me, together with Germany and Spain.

“It is a very good league, it is a crazy league. A lot of my colleagues play there, but we will see. I am still young, only 26.