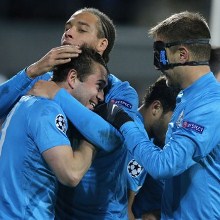 In a dire affair conducted under a constant Russian downpour, Zenit’s expensively assembled team could only fumble their way towards a host of half-chances.

Hulk and Axel Witsel, recruited for £64million from Porto and Benfica respectively, continued to struggle alongside their new Russian team-mates and it fell to Kerzhakov to make the points safe following Bram Nuytinck’s careless foul on Aleksandr Aniukov.

John van der Brom’s Anderlecht emerged with little credit either, failing to even register a shot on target until the final 10 minutes, and the Belgians duly sank to the bottom of Group C.