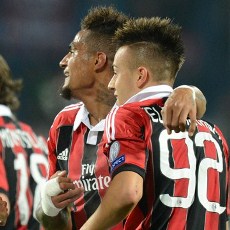 Zenit St Petersburg were left ruing their luck as they suffered a home Champions League defeat against AC Milan to further deepen the woes that have engulfed the club.

The Russian champions have been thrust into chaos following player divisions that have been played out in public following the big-money arrivals of Hulk and Axel Witsel last month.

That has culminated in Zenit winning just one of their past five league games and seen captain Igor Denisov exiled for his claims the new signings are over-paid compared to their colleagues.

Milan themselves arrived in Russia under pressure, sitting 11th in Serie A, but left celebrating their first Champions League win of the campaign after surviving a brave Zenit comeback.